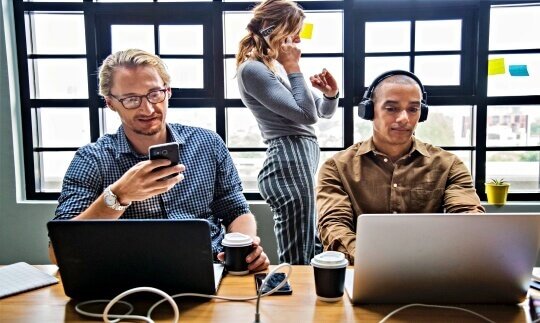 What are listening barriers?

Listening barriers are factors that prevent, impede, and deflect the accurate transmission of information or message from the speaker to the listener of intended recipient.

If there is any kind of interference or misunderstanding between the two-party but mainly on the part of the listener, communication is not effective.

Which is the main barriers to listening?

The main barriers to listening are the distractions that occur internally and externally.  Internally, people are often thinking about their thoughts or plans and not paying attention to what the other person is saying. Externally, many distractions make us not focus on what others are saying.

Overall, the main barrier to listening is a lack of focus. When we are not focused, our minds wander and we quickly lose interest in what the other person is saying.

As a result, we miss key points, fail to understand the speaker’s message and end up misunderstanding them.

Here are other examples of listening barriers:

Lack of attentiveness — or “tunnel vision” as it’s sometimes called — is one of the main barriers to listening.

It happens when a person becomes so focused on what they are going to say next they stop paying attention to someone who is speaking.

Tunnel vision can be caused by many things, including boredom, impatience, preconceived notions about the other person, and just being plain rude. But whatever the cause, it always results in poor communication.

When we are not paying attention, our minds are wandering and we are not listening to the person who is talking.

We might be thinking about something else entirely, or we might be half-listening while trying to plan our response. This prevents people from understanding each other.

Making assumptions limit our ability to take in new information. When we make assumptions, we are essentially predicting what the other person is going to say and therefore we are not paying attention to them.

We stand there just formulating our response in our head, based on what we think they are going to say. This can lead to all sorts of communication problems because we’re not hearing the other person’s point of view.

We’re just guessing at what it might be. It causes us to miss important information or react based on our assumptions rather than what the other person is saying.

3. Trying to dominate others

Good examples of listening barriers include people who try to dominate others during a conversation. When we focus on ourselves and what we want, it’s difficult to pay attention to the other person who is talking.

For example, if we feel like we know what they’re going to say next, then we end up interrupting them and getting frustrated when they talk.

We think they shouldn’t be saying it because we already know what they are saying. This type of behavior is often in people who are power-hungry or need to be right all the time. They talk over others, interrupt them, or steamroll them to get their point across.

Defensiveness is another barrier that keeps us from listening to others. We often form our reactions before we hear everything someone has to say.

For example, if I’m feeling insecure about something, and you ask me how my day went, I might immediately tell you that I’m tired of people asking me about my day.

Without waiting to hear your follow-up question, I automatically assume you are going somewhere with the conversation and quickly pull out my defense.

5. Distractions in the environment

A barrier to listening is anything that distracts us from focusing on the message. It could be something in the environment like a noisy room.

For example, if you are in a meeting with someone and there is noise in the background, it is difficult to focus on what that person is saying.

Other common distractions include email notifications, text messages, ringing phones, and people coming up to you while you are talking.

Prejudice is an irrational attitude or opinion not based on reason or experience. It usually involves judging others based on stereotypes, which are oversimplified and inaccurate generalizations about a group of people.

When we are prejudiced, we stop listening to what the other person is saying and start formulating our responses instead. We may even argue with the other person before they have even had a chance to finish speaking.

Our prejudices can affect what we hear, causing us to block out the message. For example, if someone tells you about their political or religious views, you might decide not to listen because your views are the opposite.

Read also: 12 Examples of Weaknesses in a Person

Contentious individuals don’t listen to the other people, they simply argue back. They might be thinking, “I’m going to prove that I am right and that she is wrong!”

Some subjects like religion or politics often evoke such contentious responses. The purpose of the debate is not to reach a consensus, but rather to present and defend one’s arguments as effectively as possible.

In contentious debates, people get caught up in defending their arguments instead of listening to what the other person is saying.

As a result, they often miss important points or counterpoints that could help them understand the other person’s position.

When we hear someone say something, our brain often tries to make sense of it right away. This can be caused by several things, such as impatience or preconceived notions about the person or topic.

It can lead us to form opinions or judgments about what the person said without actively listening to them fully.

It is important to stay open-minded and give the other person a chance to explain themselves before drawing any conclusions. Otherwise, we may not only miss out on what they are trying to say.

Jumping to a conclusion can prevent us from understanding the other person’s point of view and getting the most out of the conversation.

We might have conscious beliefs about certain groups of people, but our unconscious biases can guide our decisions in ways we’re not aware of.

Unconscious biases play a role in how we listen to others. For example, if we have a subconscious bias against some people, we might not be as attentive to what they say or be more likely to interrupt them.

But, if we have a positive unconscious bias towards someone, we might be more likely to give them the benefit of the doubt and listen more carefully.

Unconscious bias is often difficult to identify and overcome because we’re not aware of it happening. However, we have to be aware of our unconscious biases.

10. Speaking too fast or too slow

Speakers can inadvertently create barriers to listening by speaking too fast or too slow.

When people have a higher rank in a particular context, they are typically afforded more privileges. This gives them an unfair advantage, especially in communication situations.

Social status can also be a barrier to listening. When we view someone as having a lower social status, it creates a psychological barrier that interferes with our ability to listen to them.

It is because we tend to focus more on their social inferiority than what they are saying. Even if we don’t consciously think that someone is inferior to us, we may still not listen to them or take their advice seriously.

When someone is dismissive, they are not open to what the other person is saying. They are not interested in hearing their side of the story or understanding their perspective.

Being dismissive often comes across as being judgmental or condescending. It can also make people feel as if they are not respected or that their opinions are not valued.

Dismissive behavior is a barrier to listening because it sends the message that the speaker is not worth our time or attention.

That type of behavior can be exhibited in many ways, such as cutting off the speaker, talking over them, or making negative comments about what they are saying.

There are many different types of listening barriers that can impede effective communication. Some of these barriers are caused by the speaker, such as a poor speaking voice or poor language usage.

Other barriers are due to the listener, such as not paying attention or being distracted. And still, others are environmental, such as noise or interference.

Whatever the cause, it is important to be aware of these barriers and do what we can to overcome them. This means making a conscious effort to improve our speaking and listening skills.

And taking steps to create an environment that is conducive to effective communication. With practice and patience, we can all become better listeners and communicators.