Home Music for Office Why Music in the Office While Working Has to Stop? 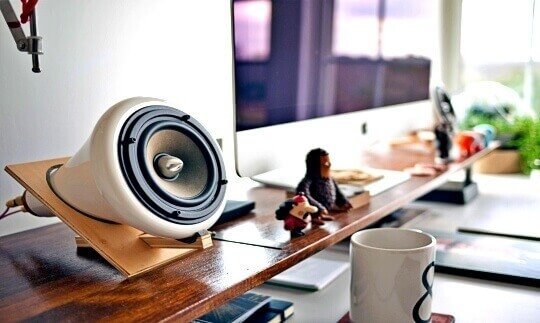 There are other good reasons for playing music in office while employees are working. For instance, it can bring them happiness and a sense of feeling relaxed. But there is not much reason for listening to background music if some people find it as an obstacle to their work.

Some employees become the Hi-FI music system gate gatekeeper to keep playing their preferred type of music in the office. By doing so, they forget that it is their favorite music, not others.

Most people’s taste in music is abysmal. So, it may be acceptable if everyone gets a say on what is on the playlists. However, that is not always the case.

Being Forced to Listen to Music at Work

Those who like playing music in office do not often see the need to seek approval from the rest of colleagues. Instead, they play whatever tunes that make them feel good.

But forcing others to listen to the music they loathe is a form of torture. People get stuck listening to whatever song is playing around them, and the same tunes are played over and over.

Having to listen to the choice of music you despise over and over can push others over the edge. Some employees grind their teeth each time music played with much enthusiasm by colleagues next to them.

People get even more annoyed when office music enthusiasts sing along, tap their feet and hands to every tune. That is everyday workplace violence, and if someone complains, it triggers arguments.

The intention of those who enjoy office music might not be to annoy others. However, if some people do not like it and others do, then it should not be allowed. It is destroying the workplace harmony of employees.

Does music increase productivity? Well, many workplaces allow music in the office under the false notion that employees become productive when they carryout tasks while listening to music.

That is a fantasy, and they are not productive. What about the performance of other employees who despise music in the office? Too many distractions affect overall productivity.

Also, people who think that music in the office is good, they do not look at the other indirect costs, including staff turnover, and depriving them of good employees.

Working in a crowded office is a nightmare. It is even unbearable when there is loud music in office. It becomes virtually impossible for conscientious employees to do their jobs when music is playing in the background — unless they wear noise-canceling headphones to try blotting out the music.

Wearing Headphones in the Office

Wearing noise-canceling headphones in the office can help, but it is also risky. People can concentrate on their work without much distraction. However, most offices have smoke and fire alarms.

To wear headphones while in the office can prevent someone from hearing safety alarms or warnings. That increases the risk of injuries in case there is a smoke or fire outbreak.

Music enthusiasts can listen to tunes through Headphones and can play whatever is suitable for their work. However, if many employees have their earphones on and keep blasting music in their ears all day, it can affect their hearing.

Employees talking to one another within the same office becomes a big challenge because people do not pay too much attention to their surroundings.

When an individual wants to talk to another, they either stand up or wave at each other. People become more irritated by one another and their relationships start to deteriorate.

In most offices where music is allowed, there are usually antisocial behaviors, distractions, lack of cooperation, distrust, and negative relationships. The anti-social culture gives people the excuse not to talk to each other.

However, in a music free office environment, people talk and listen to each other better — and become more empathetic to one another. It is different when you have music in the workplace.  People stop having meaningful conversations and that damage the teamwork and relationships.

Good companies create a culture that everyone looks forward to coming to work, and that means working hard to make employees share, talk, and trust each other.

Is listening to music in office while working makes your workplace environment meaningful?  Please leave your thoughts in the comment section below